Communion bread is also known as “the bread of haste” or “the Passover bread.” When the children of Israel were set free from Pharaoh’s bondage in Egypt, they did not have time to bake bread in the traditional way, with leaven, or yeast, which causes the bread rise. It was made with unleavened flour in haste for their journey.

One of the last things the Lord Jesus did here on earth was to take Communion with his disciples; and strangely, the last Message that Brother Branham preached was 65-1212 Communion.

The Word teaches us that the bread should be made by people who have dedicated themselves and consecrated themselves to God. Only a Holy Ghost filled believer should prepare the Bread for a Communion service.

•  To prepare the Communion bread, first mix flour and water. Start with ½ cup of hot water and add tablespoons at a time until formed to a soft dough (by hand or by a mixer.)

•  The dough is kneaded slightly. Roll out very thin on a floured surface.

•  Pierce dough three or four times with a fork, so it will remain flat as it cooks. Place the rolled dough on a baking sheet lined with parchment paper.

•  Bake bread for 15 minutes in a preheated oven at 400F. Or, place the rolled dough in a heavy skillet that has been pre-heated. Turn the dough once to allow both sides to cook in the skillet. No oil is necessary.

•  Now break the bread up into small pieces with your hands. The jagged edges of the bread represent the broken body of the Lord Jesus.

It is ok at this point to throw away extra bread, as it hasn’t been prayed over.

Once the bread is prayed over at the Communion service, the remaining bread is to be burnt before the dawning of a new day. The burning of the bread is typed to Israel’s journey in the wilderness, when new manna fell from Heaven each day. The bread from the day before became contaminated and was no good. That is, except for the Sabbath Day, when no man was permitted to labor, and gather the new manna from the fields. On this occasion, the food was stored up on the day before and gathered in their tents, and the Lord preserved it for them to eat on sabbath day, or day of rest. (Reference - Exodus 16)

Brother Branham also typed the burning of the bread to the seven church ages, as each church age has to completely perish in order to give way to the fresh manna the next church age brings. Furthermore, he typed it to the personal experience of a believer, and how we must die daily, to allow the Holy Spirit to come down fresh in our lives each day.

In order to make sure all the bread is completely burnt, it is best to place the bread in a small paper bag, and place it in the middle of a hot fire. This will insure that all the remaining remnants are burnt.

This kosher bread, it's made by a Christians. It's unleavened bread. And if you'll notice it, when you place it in your mouth, it's very rugged, to be bitter. It's wrinkled and broken, mingled, that means the broken, mangled body of our Lord Jesus. Oh, when I even think of it, my heart seems to skip a beat! When I think that He was mingled and bruised and smitten, the innocent Son of God! Do you know why He did that? Because I was guilty. And He become me, a sinner, that I by His Sacrifice might become likened unto Him, a son of God. What a Sacrifice!


The Communion wine represents the Blood of the Lord Jesus, which cleanses us from our sins, and is taken to show forth the Lord’s death until He comes. Communion wine is not to be grape juice, which sours and spoils as it gets old, but literal wine, which gets better and stronger as it gets old; it never loses its strength.

Just as the Blood of Jesus Christ doesn’t sour and spoil as it gets older, but gets stronger and better as the days go by to the believer.

In the Bible, Wine represents stimulation by the Word, when it has been revealed to the believer.

58 And the wine, I said, which come to me, that the wine symbolizes that it was the power of—it was the power of stimulation by revelation. See? And that’s when something has been revealed. It gives stimulation to the believer, because it’s presented by revelation. See? It’s something that God has said. It’s a mystery; they can’t understand It, see. And, after a while, God comes down and reveals It, and then vindicates It.

It is not necessary for the wine to be made with “Holy hands” like the bread. Kosher Wine, or Passover wine can be purchased from the store. However, for instructions on how you can make your own wine, go to the Recipe Cards on this page.

We will provide wine and small plastic cups for our local congregation in Jeffersonville. For the Communion service, the wine can either be taken in small cups, one for each individual, or shared amongst one another with larger cups. After taking the Communion, unlike the bread, the Communion wine is ok to discard.

Taking Communion, which represents the Blood and Body of the Lord, always represents “Victory” to the believer. Even hundreds of years before Communion was instituted, at the death of Jesus Christ, Abraham took Communion with God.

After he had won a great victory in the slaughter of the kings to rescue Lot, his brother, Abraham met Melchesidec, and they took Communion together.

Each time we take Communion, the bread and wine represent a victory in our lives over the enemy. And one day, when the battle is all over, we, the seed of Abraham, will meet our Lord in the air for that great Communion Service, and will sup with Him face to face, at the Wedding Supper.

Notice, after the battle was over, Melchisedec served His victorious child communion; think of that, part of Himself! Now we want to see here. In type here is, in view, the communion. After the battle, He gave of Himself, because the communion is part of Christ. And after the struggle is over, after you've done got yourself whipped out, then is when you partake of Christ, become part of this Being. You get it?

Jacob wrestled all night, and wouldn't turn Him loose until He blessed him. That's right. Battled for Life! And after the battle is over, then God gives you of Himself. That is His true communion. The little bread and wafer just represents It. You shouldn't take it 'less you've wrestled it out and become part of God.

But Melchisedec, after His child Abraham had won the victory, Melchisedec met him and gave him wine and bread; showing that after this earthly battle is over, we will meet Him in the heavens and take the communion again. It'll be the Wedding Supper. "I will not drink no more of the vine, or eat the fruit, until I eat it and drink it with you, anew, in My Father's Kingdom." Is that right?

We meet Jesus in the air, before we get Home. That's right. Second Thessalonians tells us that, for, "we meet Him in the air." 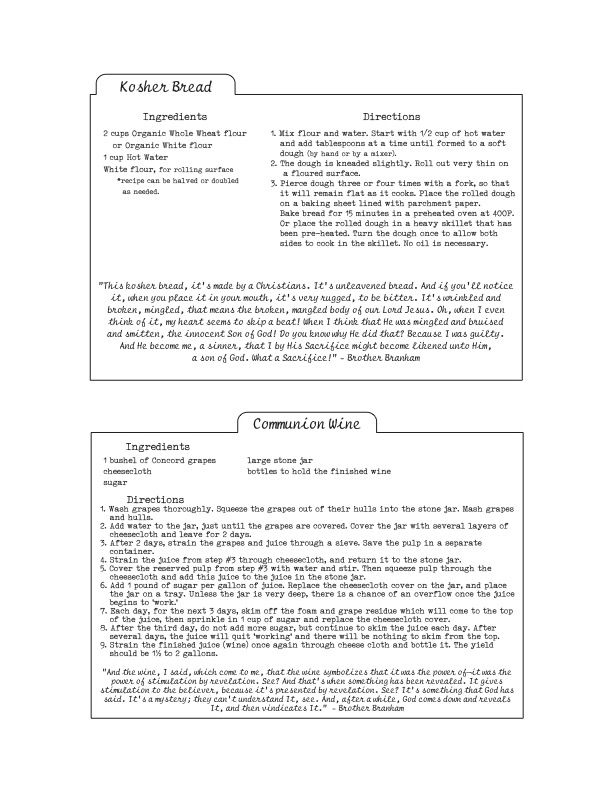